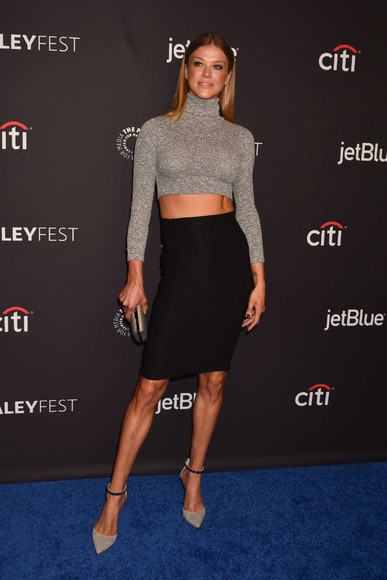 Adrianne Palicki is a talented actress born on May 6, 1983, in Toledo, Ohio, USA, to father Jeffrey Palicki and mother, Nancy Palicki. She has an older brother named Eric Palicki. She holds an American nationality and belongs to Polish and Hungarian ethnicity.

Adrianne Palicki began her career when she appeared as Tyra Collette on the NBC series Friday Night Lights from 2006 till 2011 and also as Barbara Morse on the ABC series Agents of S.H.I.E.L.D. Palicki has also appeared on movies such as G.I. Joe: Retaliation in 2013, John Wick in 2014, and more. She currently stars in the Fox show The Orville as Commander Kelly Grayson.

Adrianne Palicki is a hitched lady. She is currently married to American actor and singer Scott Grimes in 2019, in a holy ceremony. The couple does not have any children as of now.

Adrianne Palicki has a slim banana figure with firm busts, flat stomach, and full hips. Her dress and shoe size are 4 and 5. She wears a 34B bra standing 5'9" tall and weighing 59 kg.

Adrianne Palicki is a talented actress who has an estimated net worth of $4 Million according to the celebrity net worth. Most of her income is generally made through her acting. Due to her hard work, dedication, and solicitude, she has made herself worthy of millions and earns approximately $640,000 every year as her annual salary.

Observing her successful career, it is certain that her net worth in the coming years is sure to increase. Her husband Scott Grimes, who is also an actor and singer, has a net worth of $5 Million. The couple lives a luxurious and lavishing life in New York City, New York.

Adrianne Palicki was graduated from Whitmer High School in Toledo.