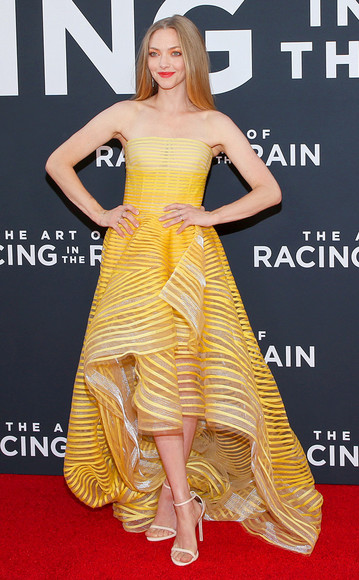 Amanda Seyfried is an American actress, model and singer born in December 3, 1985 in Allentown, Pennsylvania, US. She is mainly known for portraying her role as Karen Smith in the teen comedy film Mean Girls in 2004.

The actress has dated many celebrities over the period. She dated American actor Micah Alberti when they met on the set of TV series, All My Children. They dated in 2002 and broke up in 2006. Seyfried was also in a relationship with a Canadian singer Jesse Merchant in 2006, however the duo seperated in 2008 while she was filming for Mamma Mia!.

In February 2016, Seyfried started dating an American actor Thomas Sadoski and got engaged on the same year in September. A year later in March, they got married in a private ceremony and were blessed with a beautiful daughter in the same month

The American actress, singer and model Amanda Seyfried has a current net worth of $10 Million. Moviefone ranked her in its 25 Under 25: Hollywood's Hottest Young Stars list each year from 2008 to 2010. Glamour magazine voted Seyfried as Most Down-to-Earth in 2010 and ranked her no. 3 on its 50 Most Glamorous Women in 2010 list.

Seyfried also has released a number of songs and albums from which she earns a lot. She also has appeared in printt ads for Limited Too. Her few brand endorsements include Movado, Esquire, Ale de Peau Beaute and earns a decent amount of money.

Her husband Thomas Sadoski who is an actor has a net worth of $4 Million. They both lives a luxurious lives with their daughter in Los Angeles.

Amanda Seyfied graduated from William Allen High School in 2003. She joined Fordham University in 2003 to pursue her bachelors degree, however, she didn't attend it after being offered a role in Mean Girls.