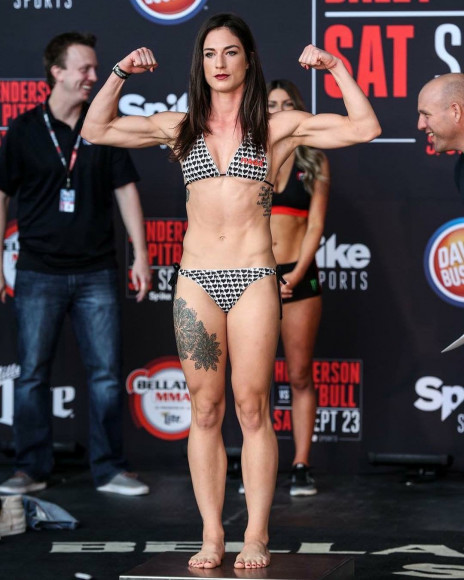 Brooke Mayo is an American mixed martial artist born on August 10, 1992, in Pleasanton, California, USA, who is famous for her nickname as "The Bully." She first began her MMA fighter at WFC 14 where she fought Brietta Carpenter and she won by unanimous judges decision. She faced her first defeat at GKO 4- Global Knockout 4 when fighting Shaianna Rincon and was very sad about it. She still is fighting as an MMA and is very happy about it.

Talking about her personal life, Brooke Mayo is in a relationship with a professional MMA fighter Nick Pica. However, there is no information about their future plans but, they are living a happy life together.

Brooke Mayo has an astonishing figure. Though her body measurements are not known but, observing her through television it can be seen the fighter has maintained it extremely well. She stands 5'7" tall and weighs 56 kg.

Brooke Mayo is an amazing mixed martial artist who has an estimated net worth of $1 Million according to numerous sources. The utmost of her salary is widely made through her fighting tournaments. However, her annual paycheck is not disclosed but, observing her success, it can be sure to be in hundreds of thousands every year.