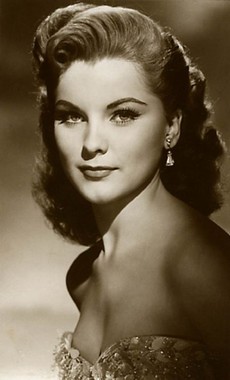 Debra Paget is an American actress who in the 1950s hypnotized moviegoers with beauty and talent.

Debra Paget was born on August 19, 1933, in Denver, Colorado, to Frank Henry Griffin and Margaret Allen. Her father was a painter, and on-stage, mother was an actress.

She had three sisters and a brother. Also working in the film industry were her brother and sisters Frank Griffin, Teala Loring, and Lisa Gaye.

She married three times. Debra Paget married actor and singer David Street on January 14, 1958. But a few months later, on April 11, 1958, they were divorced.

On April 19, 1962, Debra married Ling-Chieh Kung, a wealthy executive of the Chinese-American oil industry. After her third marriage, she retired from performing. Kung was Ms. Chiang Kai-Shek's nephew. Together they had a son, Gregory Kung, who was Debra Paget's only child. In 1980, the couple were divorced.

Paget wore 34C bra size and weighed 113 pounds. With only 5’ and 2”, Debra had a quite petite figure. Check out also measurements of Yvonne De Carlo, Marilyn Monroe, and Jill Ireland.

She had three sisters and one brother. Her brother Frank Griffin and her sisters, Teala Loring and Lisa Gaye, also worked in the film industry.

Debra Paget is an American actress who has a net worth of $1million.

Debra Paget's source of income is mostly from being a successful movie actress.

In the 1950s, The Ten Commandments, The Tomb of Love, and Broken Arrow starred at the leading lady. She also played a leading role in Elvis Presley's big-screen debut, the 1956 Love Me Tender feature. Debra Paget is a member on Net worth Stats of movie actresses and popular celebrities.

Debra Paget received her first professional acting job at eight, while she made her stage debut in Shakespeare in 1946 at the' Merry Wives of Windsor.' She appeared in the film noir ' Cry in the City' in 1948. She was impressed by the performance of 20th Century Fox and signed with her a long term contract.

She was just out of college when she had her first prominent role in Broken Arrow's 1950 western, which was a huge success. This was also her first Fox movie of the 20th Century.

She received top billing from Fox for her performance in the 1954 adventure movie' Princess of the Nile.' Even though the film wasn't a huge success at the box office, Debra's fan mail started flooding.

She studied at Los Angles ' Hollywood Professional School. At the age of 14, she was enrolled in Fox Studio School.