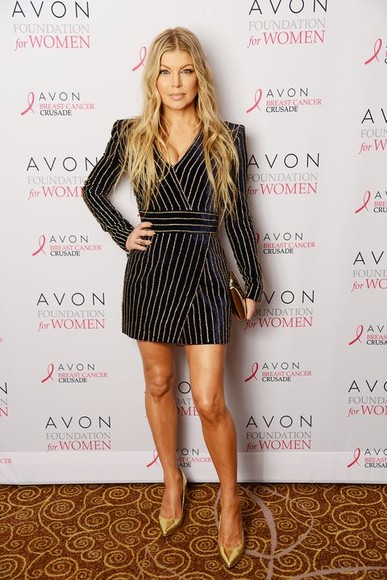 Stacy Ferguson mainly known as Fergie is an American singer, songwriter, actress, television host was born in March 27, 1975 in Hacienda Heights, California, U.S. She is also known for being a group member of The Black Eyed Peas. She has released two albums with the group before her debut album The Dutchess in 2006 where three of her songs London Bridge, Glamorous and Big Girls Don't Cry made it to Billboard Hot 100.

She continued working with her band and released other two albums E.N.D in 2009 and Beginning in 2010. Fergie has also launched her own fragrance Outspoken under Avon in May 2010. The singer released her second solo album Double Dutchess in 2017. The singer has dated several celebrities throughout the years. Mario Lopez and Fergie dated in 1984 while working in the TV show Kids Incorporated. She dated American actor Josh Duhamel in September 2004, and got engaged in December 25, 2007. The duo got married in January 10, 2009 and were blessed with a son named, Axl Jack Duhamel in August 29, 2013. However, the couple were divorced in September 2017.

The famous American Pop Singer Fergie has an estimated net worth of $45 Million. Her most of the income comes from her record sales. She is the lead singer of the group, The Black Eyed Peas. The band's album E.N.D. had a total record sales of $15.6 Million in 2009, and their other album Beginning was able to make $3.8 Million record sales in 2010. Her solo debut album The Dutchess made a total record sales of $11.9 Million in 2006. Fergie has maintained an annual income of $8 Million. She and her former husband Josh Duhamel also owns a mansion worth of $8 Million in Brentwood, however, after their separation in 2017, it is unknown how will it affect her net worth.

Fergie belongs to a Roman Catholic family where she attended Mesa Robles Middle School and graduated form Glen A. Wilson High School. She was a bright student and also a cheerleader and a girl scout.