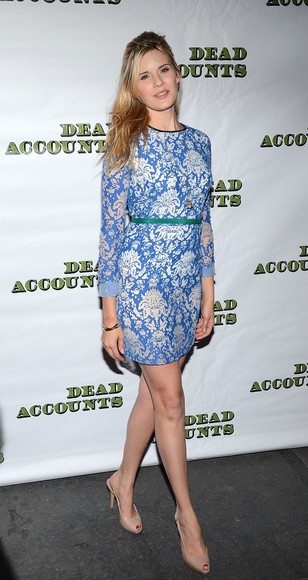 Margaret Grace Denig is an American actress and model born on September 21, 1983, in Worthington, Ohio, USA, to a family jewelry business runner father and mother Rick Denig and Valinn Everett. She is the eldest daughter and has a younger brother and sister. She belongs to English, German, Scottish and northern Irish ethnicity.

Maggie Denig is famously known for her role on the ABC TV series Lost as Shannon Rutherford, Kim Mills in Taken, and Irina in The Twilight Saga. For her hard work, she later went on to appear on films like The Jane Austen Book Club in 2007, Malice in Wonderland in 2009, and in 2018, she went on to join the TV series Fear the Walking Dead as Journalist Althea.

Maggie Grace is a hitched lady. She is married to the CEO of an entertainment company Brent Bushnell on May 28, 2017. The couple is living a happy and prosperous life together.

Maggie Grace has an astonishing hourglass figure with natural busts, slim waist, and wide hips. Her dress and shoe size are 4 and 9. She wears a 34B bra standing 5'9" tall and weighing 59 kg.

Maggie Grace is an amazing actress and model who has an estimated net worth of $8 Million according to the celebrity net worth. The majority of her earnings are generally made through her movies and TV roles. Ascribed to her hard work, dedication, and solicitude, she has made herself worthy of millions of dollars.

Perceiving her success, it is certain, her net worth in the coming years is sure to take an uplift. The actress earns approximately $1.2 Million every year as her annual salary. She lives a luxurious and lavishing life with her husband in Los Angeles, California, USA.