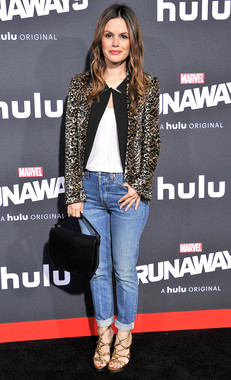 Rachel Bilson is one of American promising actress best known for her role of Summer Roberts on the American teen drama television series, “The O.C.”, created by Josh Schwartz. She is also known for her role in “The Last Kiss” and in an American science fiction action film, “Jumper”.

Rachel mother, Janice Stango, an Italian-American, works as a sex therapist and her father, Danny Bilson is a writer, director, and producer. Her grandfather, Bruce Bilson is a producer and director and her great grandfather George Bilson worked for RKO Pictures. Her great grandmother Hattie Bilson was a screenwriter.

She was in a relationship with her co-star on "The O.C.", Adam Brody for three years. She then dated the actor Hayden Christensen. The pair ended their relationship in the year 2010. However, they reconciled three months after and had a baby girl, Briar Rose Christensen on October 29, 2014. The couple again separated in September 2017.

Rachel Bilson, weighing 48 kg, she stands at 5 feet 2 inch height. At the bust, she measures 33 inches while her waist is 23 inches and the hips measure 34 inches.

Rachel has earned most of her wealth from portraying roles in different television shows and films. Her net worth is estimated to be around 16 million dollars.

Rachel is also a fashion junkie. She describes herself as having a vintage sense of style. She takes Kate Moss and Diane Keaton as her fashion inspirtions. In late 2007, she approached DKNY Jeans, to design a clothing line with the fashion brand.

In September 2008, they launched Edie Rose. In the month July of the same year, Rachel modeled herself for the collection. She then collaborated with her personal stylist Nicole Chavez and Steve Madden. They together launched the footwear destination, "ShoeMint". She then designed a shirt for Invisible Children, in 2013.

In 1999, she completed her studies from Notre Dame High School. She then studied at Grossmont College but she dropped out after a year. Rachel then took her father's advice and pursued a professional acting career.