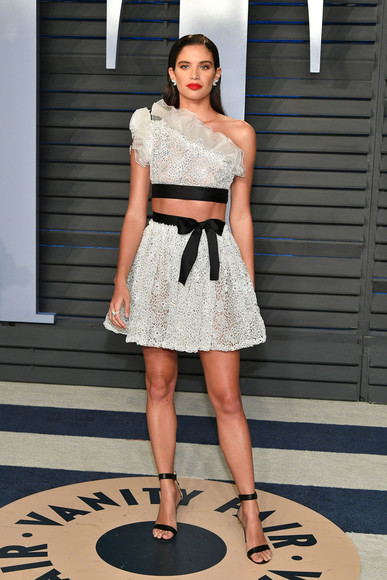 Sara Pinto Sampaio is a Portuguese model and actress born on July 21, 1991, in Porto, Portugal, to father Armando Sampaio and mother Cristina Sampaio. She has a brother and was raised Roman Catholic. She belongs to Portuguese ethnicity.

Sara Sampaio was discovered at the age of 15 however, she wasn't allowed to compete in modeling until she was 16 and won a hair modeling contest in Portugal called Cabelos Pantene in 2007. Eventually, she started appearing on commercials and was signed to an agency. She made her runway debut in 2013 in the Victoria's Secret Fashion Show and announced that she would be walking with other Angels in the 2016 show.

She has walked for numerous fashion designers including Elie Saab, Balmain, Miu Miu, Prabal Gurung, Tommy Hilfiger, Emanuel Ungaro, and more. In 2017, she appeared on the cover of Maxim in United States. The following year, she became the face of Si Passione fragrance by Giorgio Armani and was even featured on the cover of Madame Figaro, Vogue Mexico, Harper's Bazaar,and more.

Talking about her personal life, Sampaio is currently single and focused on her career. Previously, she was in a relationship with American singer Alex DeLeon. The duo started dating in 2013 but broke up a year later.

Sara Sampaio has a slender banana figure with natural busts, a flat stomach, and full hips. She wears a dress size of 2 and a shoe size of 7 along with a bra cup of 32A. She stands 5'8" tall weighing 52 kg.

Sara Sampaio is an amazing actress and model who has a fortunate net worth of $10 Million according to the celebrity net worth. The utmost of her payroll is generally done through her modeling. Ascribed to her hard work, commitment, and courage, she has made herself worthy of millions of dollars.

Apart from her modeling, she has also been a part of several brand endorsements including Replay and Asos. Concerning her success, it is sure her net worth in the forthcoming future is definitely to take a huge uplift. However, her annual paycheck is yet unavailable but it is sure to be in hundreds of thousands every year.